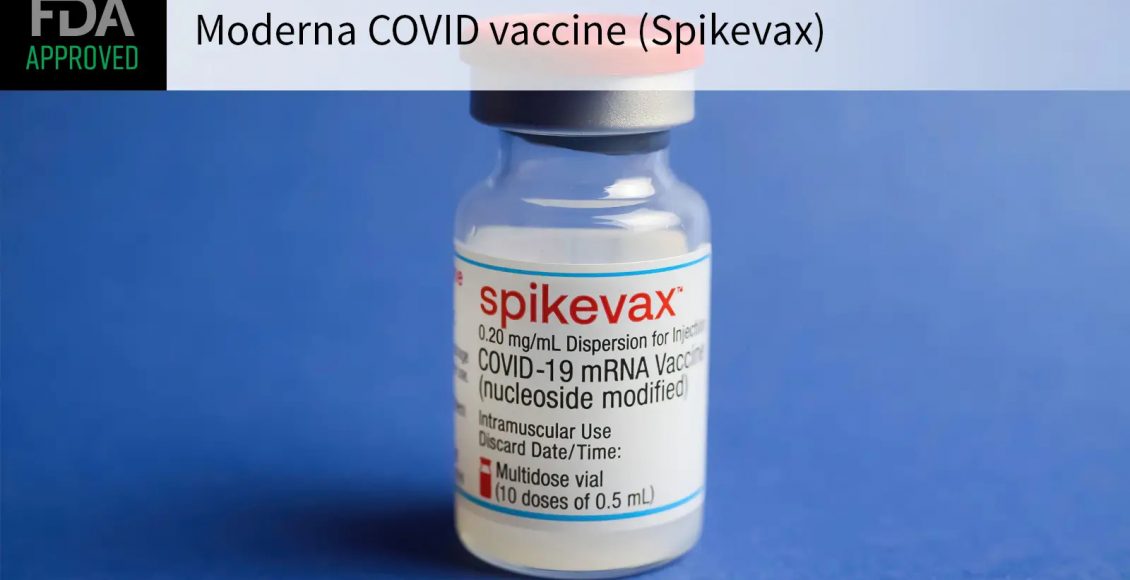 Spikevax Booster – COVID vaccine has become one of the biggest life saviors of Americans in two waves of COVID-19. The United States Food and Drug Administration gave its emergency use authorization to three different vaccines in the United States of America.

The US FDA approved Pfizer, Moderna, Johnson, and Johnson. Currently, Pfizer and Moderna have been recommended by the Centers for Disease Control and Prevention over Johnson and Johnson.

Previously both of the vaccines were approved under the EUA of The United States Food and Drug Administration. But on the 31st January 2022, The US FDA gave its full approval to the Moderna vaccine, and now it is named Spikevax.

As per the rules and regulations of the United States Food and Drug Administration, a company cannot name the drug until it has received the full approval of the authority. That is why the COVID vaccine manufactured by Moderna was named Moderna COVID-19 vaccine, and now it is known as Spikevax.

As per the official press release by the United States Food and Drug Administration, Spikevax Meets the rigorous standards of safety, effectiveness, and manufacturing quality required by the US FDA.

The vaccine has been under emergency use since December 2020, and now it has been given full approval. At the same time, the company named Moderna COVID-19 vaccine as Spikevax Vaccine.

Where to get Spikevax Booster?

Spikevax Vaccine Booster Is available in more than 15,000 locations throughout the whole United States. The Centers for Disease Control and Prevention is vaccinating every eligible American with a primary dosage and booster dose of COVID-19 in partnership with several pharmaceutical giants.

CVS Health and pharmacy are among the biggest names when it comes to pharmaceutical giants in the United States. The Centers for Disease Control and Prevention is in partnership with CVS and its subsidiaries, such as minute clinic, to provide free Spikevax vaccine booster to every eligible American.

Another big pharmaceutical giant is Walgreens which also has a partnership with the Centers for Disease Control and Prevention to provide free Spikevax vaccine booster to every eligible American. They have more than 4500 locations throughout the nation to provide these services.

Just like CVS Health and pharmacy, you have to create an appointment to get yourself vaccinated at Walgreens. As per the current rules, Walgreens is not accepting walk-ins for the Spikevax vaccine. You can use the above-given button, which will directly take you to the official you have seen appointment page of Walgreens.

The next major pharmaceutical giant working on both the east and West Coast of the United States is Rite Aid pharmacy. They also have a huge number of locations on both coasts To provide Spikevax Booster to every eligible American in partnership with the Centers for Disease Control and prevention.

Other options for Spikevax Booster

Apart from the above-given pharmaceutical giants, several pharmacies And independent clinics are working with the Centers for Disease Control and Prevention to provide Spikevax Booster to every eligible American.

For example, one of the biggest retail giants, Walmart, is also working to provide Spikevax vaccine booster in association with Quest Diagnostics. You can get yourself vaccinated at most of the locations of Walmart throughout the nation.

At the same time, pharmacies like Safeway And Primary Health care are actively working to provide Spikevax Booster. You can always check your local county data to see which pharmaceutical companies and pharmacies are providing free services in your location.

Even though moderna has changed the name of its vaccine from Moderna COVID-19 vaccine to Spikevax, they have not changed the basic ingredients and formula of the vaccine.

That is why there are no new Spikevax Vaccine side effects reported by the manufacturer.

Common Side Effects of Spikevax Vaccine

Fatigue and headache are the next major side effects of Spikevax Booster. As per the data points, they were reported 71% and 68%, respectively. You don’t have to take any medicine or extra medical care for these side effects as they go away within 24 to 48 hours without any extra medication.

At the same time, fever was reported in just 17% of the participants in the trial of Spikevax Booster. Swelling at the site of injection was one of the least common side effects, but it is not a life-threatening situation.

Serious Side Effects of Spikevax Booster

If you have already taken the vaccine and now you are experiencing swelling in your face, tongue, and difficulty in breathing, it could be an allergic reaction, and you should call 911 or your doctor as soon as possible.

Spikevax Vaccine is not 100% safe to use, as it also comes with several warnings and precautions. As for the company, if you already have a severe allergic reaction and life-threatening condition due to an allergic reaction after taking any other vaccine injection, then you should avoid taking Spikevax Booster.

If you are immune-compromised, Then you should not directly go and ask for the Spikevax vaccine. You should consult with your doctor before taking the vaccine, as it can cause life-threatening conditions if your immune system is not able to handle the regular dose of the vaccine.

As per the company, if you have a bleeding disorder or you ever fainted following a needle injection, then you should either consult with your doctor or postpone taking the vaccine till you can consult.

People who are struggling with any other serious illness should consult with their doctor before taking the vaccine. At the same time, people who have anxiety related to injections should take the vaccine under strict guidance and observation of medical professionals.

The symptoms of the above-given conditions or diseases can develop within 14 days of taking the vaccine. That is why you should keep an eye on every side effect.

As part of the rules and regulations of the United States Food and Drug Administration, the company cannot give the name to its drug unless it has already received full approval from the authority.

In their official statement, the company mentioned that they have just received full approval and named its vaccine Spikevax, but they have not changed any ingredient or the manufacturing process. Because of all that, there are no new side effects reported for Spikevax.

Spikevax Vaccine is not 100% safe to use as it also comes with several warnings. If you have any heart condition, then you should consult with your doctor before taking medicine as it is known to cause inflammation in the heart muscle.

Where can I get Spikevax Booster?

In the United States of America, you can get yourself vaccinated with Spikevax Booster at any Walgreens, CVS Health, and rated pharmacy nearby your neighborhood. All of these pharmaceutical giants are working in association with the Centers for Disease Control and Prevention to provide free vaccines to every eligible American.

Where to Get Free COVID Test Kits from Government? | At-Home Covid Test|